Poster: Fire to the Cybernetic Prison 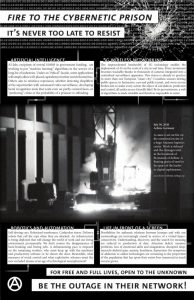 AI labs, recipients of several $100M in government funding, are working to put “machine learning” algorithms in the service of a long list of industries. Under an “ethical” facade, some applications will simply allow well-placed capitalists to further enrich themselves. Others aim to reinforce repression, whether detecting shoplifters at the supermarket with automated video surveillance, developing facial recognition tools that work even on partly covered faces, or “predicting” crime or the probability of a prisoner re-offending.

The unprecedented bandwidth of 5G technology enables the deployment of AI on the scale of a city in real time. Every movement becomes trackable thanks to thousands of cameras integrated into a centralized surveillance apparatus. This vision is already in practice in more than one European “smart city”. Countless sensors dotting public spaces, in businesses, cars and public transit, and worn on our bodies aim to make every action the object of calculation, prediction and control, all under an eco-friendly label. By its pervasiveness, a web of algorithms is made invisible and therefore impossible to resist.

Self-driving cars. Robotized warehouses. Cashierless stores. Delivery robots that call the cops when they are attacked. An infrastructure is being deployed that will change the world of work and our living environment permanently. We don’t mourn the disappearance of back-breaking and boring jobs. A dehumanizing pace is imposed on the remaining workers, who must keep up with the machines and productivity software or be shown the door. Meanwhile, what measures of social control and what exploitative schemes await the new excluded masses of an age of technological unemployment?

Life in Front of a Screen

Possibilities for authentic relations between humans and with our surroundings are increasingly erased in service of a virtual hyper- connectivity. Understanding, discovery, and the search for meaning are reduced to production of data. Attention deficit, memory problems, loss of emotional skills and imagination, disrupted sleep, musculo-skeletal pain, anxiety, loneliness, depression: the symptoms of addiction to online technologies are worsening as the proportion of the population that has spent their entire lives immersed in touch screens grows.

For free and full lives, open to the unknown
Be the outage in their network!