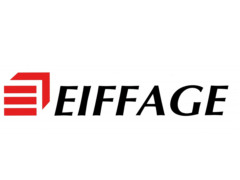 With 69,000 employees and a turnover of 14 billion euros, Eiffage is a gigantic building and civil engineering company (the third biggest in France, after Vinci and Bouygues) and, like all the big bosses in the concrete business, the state, for them, is a privileged client. Offices (like the whole “Garance” in the twentieth district of Paris, for the Ministry of the Interior), schools, hospitals, bridges, highways (where Eiffage is also manager), CCTVs, fiber optics (8 contracts with local communities, for 5200 km of fiber optics for broadband communications), railway lines (they participate in the TGV Lyon-Turin line project) … and they obviously have thrown themselves into the lucrative market of Greater Paris: to begin with they got the work for extending metro line 14, from Saint-Lazare to Porte de Clichy.

Eiffage also build quite a lot of prisons, the exploitation and maintenance of which they ensure as part of a Public Private Partnership (giving them lucrative rates from the Ministry of Justice). According to their advertising it is nothing less than “the prison of the twenty-first century […] this new generation of prisons combines maximum safety with quality of accommodation conditions.”
They built the prisons of Maubeuge (finished in 1990), then the lot comprising those of Roanne, Lyon-Corbas, Béziers and Nancy -Maxéville towards the late noughties. Eiffage Construction Provence built between 2005 and 2008 the district of semi-freedom and remand centre for sentence management of the House of Detention in Aix-Luynes. In Rodez, a House of Detention with 100 jail places was supplied in 2013, while in Perpignan their bribes to win the contract for the renovation of watchtowers were too visible and Eiffage had to pay a big fine. At Fleury-Merogis Prison restoration work is underway, as is being done at the site of the prison of Marche-en-Famenne, in Belgium.

We must also thank Eiffage Construction for the gendarmerie [police station run by section of the army] of Châteauroux (36) and Mézidon (14), and two other police stations in Calvados. These are also the ones who built the national headquarters of the gendarmerie (DGGN) in Issy-les-Moulineaux. But so as not to make any preferences, they also built the ordinary police station in Hyères and that of Draguignan and restructured the Court of Justice in Strasbourg.

One of the Eiffage Group companies is Clemessy specializing in industrial engineering. It has a nuclear department, which is involved in the French nuclear power industry since its beginning, that is to say the construction of the Fessenheim plant in 1970. For a half a billion euros, Clemessy will provide EDF with the emergency generators for all French reactors (a security measure decided after the Fukushima accident – like that we integrate the disasters into the capitalist machine). The sister company Clemessy, Eiffage Construction Metallic, also participates in the nuclear industry, for example with the work of EPR in Flamaville, supplies for nuclear power stations of Gravelines, Chooz and Cattenom, or selling “French know-how” to Finland or China alongside Areva.

It goes without saying that by building cages (or other crap) Eiffage becomes the target of a certain anger – and as a construction company its vehicles are almost everywhere, sometimes it’s enough to just open your eyes and the fury ignites …

Here’s a little list of acts of fury that targeted Eiffage in recent years and which we have got to know about. It may be incomplete, some things could have escaped us, but mostly we hope that it will be increasingly extended in the future. Unless otherwise indicated, all these attacks have been claimed as clearly being targeted on the involvement of Eiffage in prison construction.

• In early December 2012, Roanne (42): an Eiffage van went up in smoke. Some days later, gallons of motor oil were spilled across the only road leading to the detention centre.
• October 2012, Paris and Montreuil: an Eiffage truck had its tyres flattened, a car’s tyres punctured and a window broken (other similar actions are conducted these days in solidarity with the ZAD of Notre-Dames-des Landes and against this world).
• April 15, 2013 in Pontcharra-sur-Turdine (69): four Eiffage construction machines were burned, 500,000 euros of damage; unclaimed action.
• May 12, 2013 in Rennes: an Eiffage machine set alight. Action claimed against the Paris-Rennes LGV line.
• October 3, 2013 in Pantin (93): an Eiffage fire truck (and a Vinci car).
• October 6, 2013, Paris: an Eiffage van set fire to.
• October 26, 2013, Paris: a utility of Eiffage Energie burns.
• October 26, 2013, Besançon: the windows of an office of Eiffage Immobilier are smashed with stones, the same as with a JCDecaux panel; the same evening, a machine of the tram construction site had its tank sabotaged. Actions claimed against gentrification.
• March 4, 2014, Exincourt (25): A fire destroyed an 800 square meter building owned by Eiffage and destroyed construction site machines; unclaimed action.
• September 14, 2014, Paris: the burning of an Eiffage car.
• March 1, 2015, Montreuil (93): burning of an Eiffage truck.
• May 25, 2015, Besancon: destruction of an Eiffage excavator tank, which builds luxury housing and a shopping mall in the city centre.
• June 14, 2015, Paris: an Eiffage utility up in smoke.

[Translated from French by dialectical delinquents]