Oise: The firefighters freak out … and the religious cop in 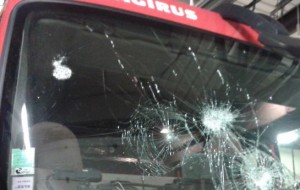 Last Wednesday, at 1.30 am, the Saint-Jean Beauvais district.
Firefighters are called to a burning vehicle. At a crossing, they find themselves blocked by a barricade. About twenty hooded young people bombard them with projectiles. The windshield is broken. The firefighters reverse and manage to escape from the trap without injury. In Oise, as in other departments, urban violence has returned. Beauvais, Creil, Compiègne were affected and in the barracks the watchword is: above all do not communicate.
Yet today, the firefighters are on edge. When called at night to a sensitive area, it is with a knot in the stomach that they leave to intervene. […] In Oise, firefighters have nevertheless trained with police to try to better manage sensitive interventions. “They have especially taught us to get us out of a trap, says Ludovic Ruaux. We need the State to release ways to help us fulfil our missions. Clearly, we must have an escort so as not to have to exclude certain areas, otherwise we are heading for disaster.” This upsurge in violence comes in a difficult context for firefighters in conflict with their management. […]
Beauvais: arsonist arrested and referred
After four nights of acts of urban violence in Argentine, Saint-Jean and Notre-Dame du Thil districts, calm has returned to Beauvais. “There has been nothing comparable to what we saw last week, says Delphine Raeckelboom, deputy prosecutor of Beauvais. Despite this, we are not lowering our guard and investigations are continuing.”
The investigation has already led to the arrest of an arsonist.” This is a young adult charged with attempted arson, said Delphine Raeckelboom. He has been referred and we have proceeded to the opening of a judicial inquiry.”. In Saint-Jean, night rounds have been carried out by members of the committee of wise men that brings together personalities from catholic, protestant, muslim and jewish religions.

[Translated by Act for freedom now!]