Belfort : A series of fires against the State

Four cars were destroyed by fire on the night of Thursday to Friday, shortly before 1.30 am in rue Dufay, Belfort. At first glance, the fire would have started from a van belonging to the general council, parked near Legay bridge. The front left door had been bent and the cabin set ablaze. The fire also destroyed materials that were in the vehicle. A saloon car parked near the van was also ablaze. Traces suggest that it was also set on fire deliberately. The blaze put two other cars out of use. 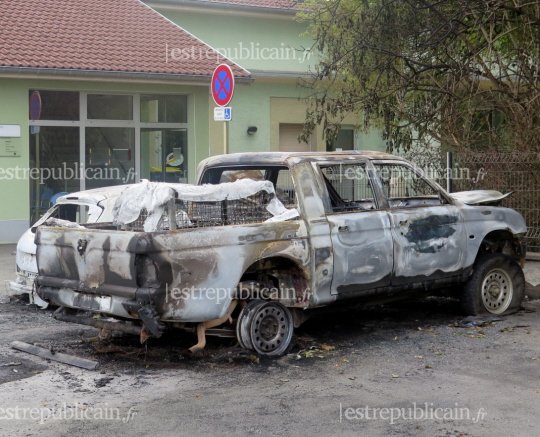 “I was going home when I saw an orange glow and a plume of smoke through my window.” David Swift is among the few who called the fire brigade of the Territoire de Belfort yesterday morning [Saturday 14, Ed], to report a violent blaze of cars in the Town Hall car park. Around 4.10am, firemen and police officers were already on site to control the blaze that was engulfing a 4X4 vehicle belonging to the Gardes Nature [nature guards] and a saloon, parked right next to it in a square for people with disabilities. […] There, neighbours recalled that this was not the first time a nature guard vehicle fitted to retrieve stray animals, had been set fire to.

A few minutes before this fire in rue Petitjean, two other cars were burned on a private parking lot in rue de Florence. The fire had obviously been started in the first and then spread to the second. This is not the first time arson has been recorded in this area close to the Mife and the new Pôle employment agency. In the spring, litter was set fire to in front of and behind the Pôle agency….