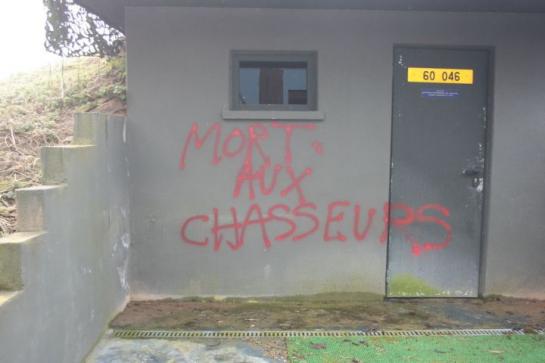 The headquarters of the Federation of Hunters of Oise in Agnetz was vandalized during the night of February 15. Computers were damaged, windows broken, furniture overturned and anti-hunting slogans painted. The damage has been estimated at more than 50,000 euros. photos:

The president of the federation spoke to local news media, « Nothing was stolen, not even a ballpoint pen. Their goal was simply to cause damage. » He added, « The damage could have been much worse: They turned on the oven to start a fire. Fortunately, it tripped. Otherwise, the entire building would have burnt. »

[Source in english : Bite back]